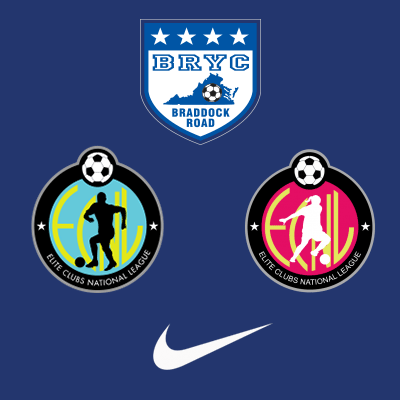 The Elite Clubs National League is excited to announce that BRYC Elite Academy will be joining the ECNL beginning in the 2017-2018 ECNL Season as a new member club in both the Girls ECNL and the Boys ECNL. The club adds its strong history to the proven track record of the Girls ECNL, and will be a founding member of the Boys ECNL.

BRYC Elite Academy has a fantastic history of developing top level women’s players, and is most famously the former club of Mia Hamm, arguably the greatest player in American women’s soccer history.

In 2012, BRYC Elite Academy claimed its 4th youth national championship when its U16 girls’ team won the US Youth Soccer National Championship. In 2016, BRYC’s U14 girls finished second in the USYS National Championships, and its U16 girls are currently in the USYS National League for the 2016-2017 season. The club also currently has 4 girls’ age groups in the USYS Eastern Regional League (formerly the Region 1 Premier League). In the past 4 years, BRYC Elite Academy has helped place 35 players into collegiate women’s soccer.

“This is an incredible opportunity and challenge for our girl’s program to play with the best clubs in the country. The ECNL offers a development platform that will challenge our players in every facet of their development while allowing them a proven path for their college recruiting track” said BRYC Elite Academy Girls Director of Coaching Larry Best.

BRYC Elite Academy has also proven itself to be one of the top boy’s clubs in the country, with three age groups (U16, U17, and U18) participating in the USYS National League in the 2016-2017 season, and all six boys’ age groups (U13-U18) participating in the USYS Eastern Regional League (formerly the Region 1 Premier League). The BRYC Elite boys program has been a regular source of talent for top collegiate programs across the country, with 21 players in college soccer from the previous 2 graduating classes alone.

“Our boys program is delighted to have been selected to participate in the inaugural season for the boys ECNL,” said BRYC Elite Academy Boys Director of Coaching Brian Welsh. “We firmly believe that the boys ECNL will become the top developmental platform for boys youth soccer in the US, and are excited to begin competition in the ECNL and the ENPL.”

“We are incredibly excited to announce BRCY Elite Academy as a new member club in the ECNL in both the boys’ and the girls’ platform,” said ECNL President Christian Lavers. “The club has distinguished itself in Virginia and nationally with a proven record of player development and competitive success, and they will add great teams and players into the ECNL competition. To add a club with their quality and leadership is another great step for the league.”

“In an ever-changing local and national soccer landscape, it has always been our intention to explore opportunities that could add value and quality to our already successful program,” said BRYC Elite Academy Commissioner Mark Dolansky. “With the quality of the clubs involved in the ECNL we are certain that becoming a member of the league will be instrumental in the continued development of our players and the growth of our program.”

BRYC Elite Academy will begin formal competition in the ECNL in August 2017.